What Does Your Favorite Number Say About You?

Do you have a favorite number? Have you ever wondered if your favorite number means anything with respect to your personality? A number of studies now reveal that it does.

For example, if you select 266 as your favorite number, you will read up on both 2 and 6 and understand that 6 is likely to be more definitive of your personality than the 2, since it is used twice. It may also be thought as valid that the starting number is also slightly more influential as well, but research hasn’t really come up with conclusive evidence on that yet.

See the number traits listed below and combine them as required for the number that is your favorite.

What Does Your Favorite Number Say About You? 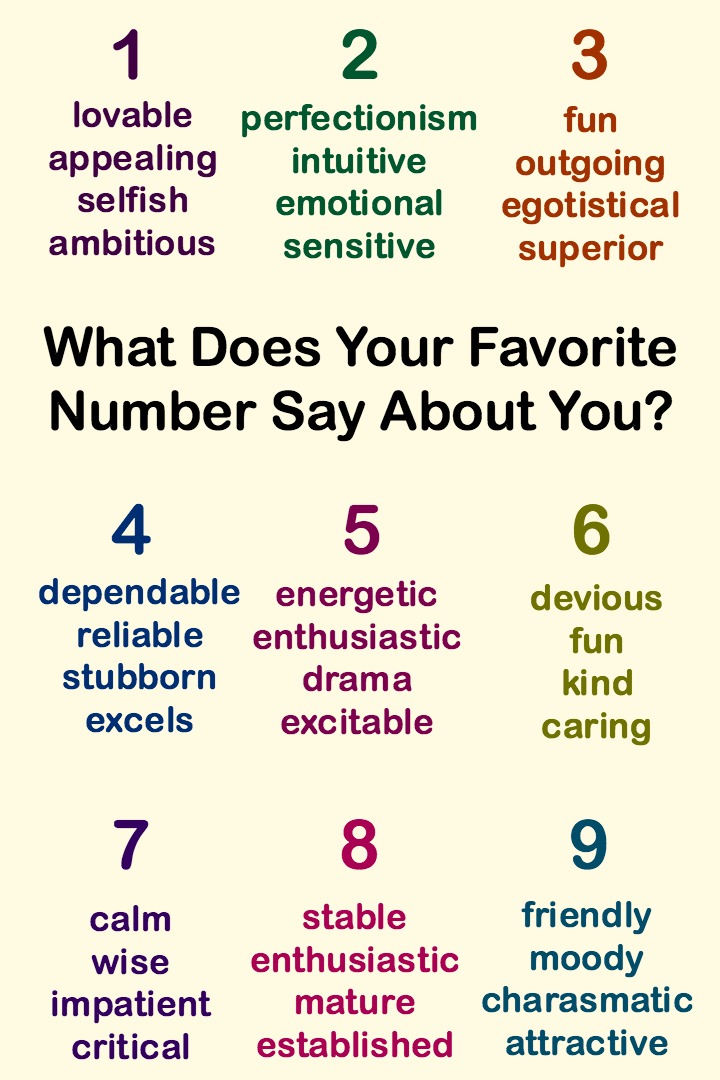 The saying ‘One is the loneliest number,’ may be false since according to one study it actually attracts those considered lovable and appealing. In another study, however, one’s are found to be selfish, ambitious and demanding so loneliness can certainly be a part of their world. Ones also make strong leaders.

One source we found has stated the twos are inclined to a degree of perfectionism, known to never have a hair out of place. Another study reveals twos to be highly emotional and sensitive with an intuitive nature, easily distraught by negativity.

One study reveals this is the number fave for those with a superiority complex, feeling that no one else around can match them. However another study states that threes are often outgoing and fun, the ‘life of the party’ so to speak, and may have artistic skill. Though not unlike their counterpart threes, they may be egotistical.

One source describes four-lovers as the most dependable and reliable person in any group, but prone to grumbling and being stubborn. Another study cited the fours as being outstanding at bringing their best to every situation, including excelling in physical appearance.

Five-lovers are described in one source as pumped up with energy and enthusiasm and may be prone to being too excitable. Another study cites boredom as a character flaw for this ‘on the go’ personality. The most challenging characteristic is their ability to attract or cause drama. Women nicknamed “drama queen” may be lovers of the number 5.

The first study we explored reveals the sixes as fun personalities but with a bit of a devious streak with a trick up their sleeves. In the movie “White Christmas” (1954) Wally Davis played by Danny Kaye was a perfect six. Another source reveals they can be kind and caring in relationships, even if slightly clingy.

Lovers of seven may go through work and school life with greater ease than most. The phrase ‘calm, cool, and collected’ may have been coined for a seven. Well-read and wise, the sevens, according to one source may also be prone to impatience and a critical nature.

Eights were found in one study to be stable and mature with their life path pretty well established. Another source also notes the eight lovers are quite please with themselves with an over the top enthusiasm for their own work and what they’re about.

One source describes nines as very friendly, with a charismatic energy that attracts crowds while another study found the nines may be somewhat moody and full of self-pity and otherwise my take on traits of the other numbers.

We only found one study that focused on this place holder saying the zero lovers were inclined to be good humorists sharing good jokes and levity. Known in social situations for adding to the fun. It wasn’t specifically stated that the class clown might be in this group, so what do you think?

So please remember to just combine your findings for double or triple digit numbers.  If the number you select is chosen because of it’s personal significance to you, such as a birthdate, or someone’s age, it will be meaningful mostly for that reason, more than the numeric significance, but have fun and Look it up anyway. Does it describe you? Let us know.