8 Truths of People Who Can’t Turn Their Brain Off

Character Traits of People Who Can’t Turn Off Their Brain

Do you know anybody who always seems to be “in their head?” They are always so caught up in their own thoughts that they are never able to enjoy the present moment for what it is. Maybe this describes you. If it does, you should know that overthinking, while frustrating is not uncommon.

While no two overthinkers think the exact same things, they do share some commonalities. These are some of the universal truths of chronic overthinkers.

8 Truths of People Who Can’t Turn Their Brain Off 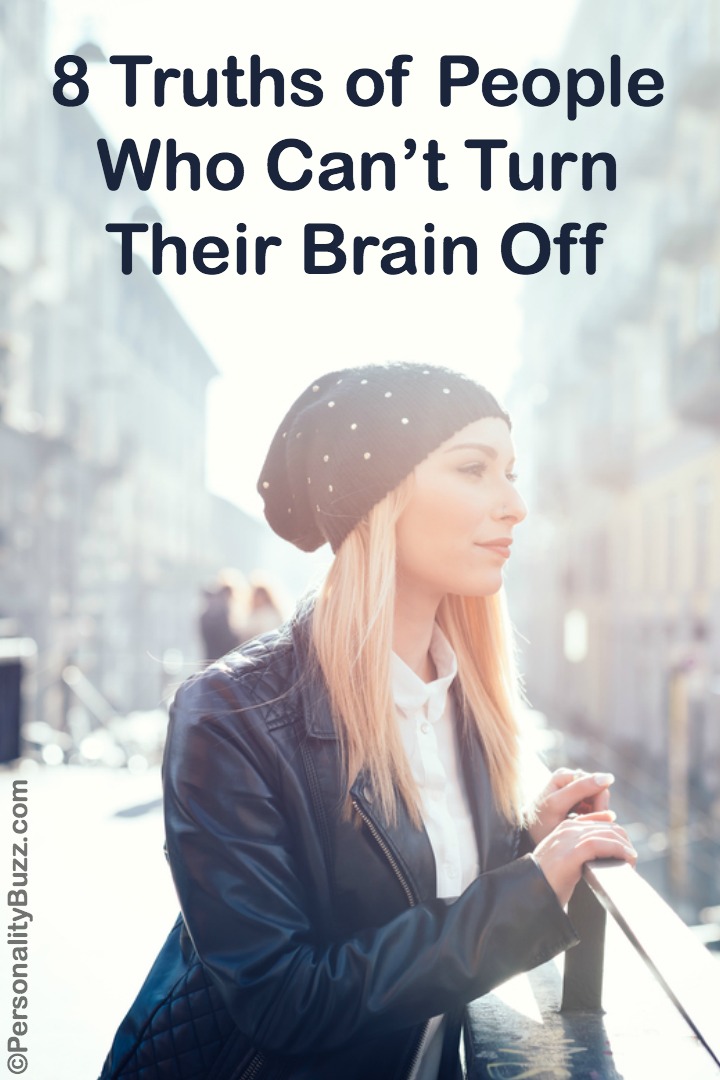 1. They Have a Tendency to “Choke”

Have you ever gone to do something that you know how to do perfectly in front of a group of people, only to not do it so perfectly?

It is very likely that your flub was due to overthinking. When you overthink, your body second guesses and you end up making mistakes.

2. They Are Prone to Anxiety/ Depression

If you are feeling anxious, it is likely due in part to intrusive thoughts that are overwhelming you. If you have depression, it might worsen by you obsessing about what you perceive to be your shortcomings.

This doesn’t mean that anxiety and depression are only caused by overthinking and negative experiences, but overthinking can certainly exacerbate both problems significantly.

3. They Mean Well (Maybe Too Well)

A typical overthinker doesn’t overthink about some things; they overthink about just about everything. This means they will think very hard about how they come across to others. So, if you meet an overthinker, they are likely to identify themselves by apologizing for things that didn’t concern you, such as not being able to shake your hand because their own hands are full.

If this happens, don’t make a big deal out of it; just shrug it off and continue on with the conversation. The best way to help an overthinker is to not let them get stuck on one thought.

4. They Have Trouble Relaxing

Overthinking means your brain is constantly in motion, which can be especially troublesome when you’re trying to unwind.

Even if an overthinker is in the most comfortable environment (i.e., watching Netflix in their pajamas on the couch at home), there’s still the menace of intrusive thoughts that refuse to go away. This is even worse while trying to fall asleep at night, as the lack of distraction is the perfect opportunity for thoughts to burst through.

Picture this: you’re going out of town and need someone to house sit. You have specific instructions for feeding and walking your dog, watering your plants, and setting the burglar alarm. Would you rather have somebody who shrugs and says they’ll try to remember all that, or someone who writes down exactly what you want and asks for clarification to make sure they have everything exactly right?

An overthinker doesn’t want to take a chance with getting anything wrong, so if you grant one with responsibility, they are going to take it very seriously. However, this does open the chances of them overthinking their responsibilities and possibly end up calling or texting you with questions. Still, an overthinker’s mantra would be “Better safe than sorry.”

6. They’ll Always Be Trying to Stop

Overthinkers want to curb their thinking, however while most problems are solved by thinking, it can be difficult to solve a problem in which thinking itself is the problem.

Thinking is like eating; you have to do it, but if you do it too much (or too little), you’re going to run into trouble.

7. They Have a Good Idea Somewhere in There

If you are an overthinker, you might be able to pitch it as a talent. After all, who else can think so many thoughts at one time? Of course, if you are thinking non-stop, most of your thoughts are going to be rather useless or detrimental. Similarly, if you talk non-stop, much of what you say is going to be of little to no value to others.

However, great discoveries and revelations in our world have been due to people obsessing over a particular problem. If it wasn’t for “overthinking” we might not have a cure for polio or have electricity in our homes.

8. They Can Occasionally Stop Overthinking (And It’s Great)

Even though it’s rare, overthinkers can still find themselves in the moment without a care in the world. When this happens to them, it’s extra-special because of how uncommon it is. They might think about how overthinking is likely to creep back in sooner or later, but if they’re having enough fun, they can just enjoy the moment.

It’s not too fun to be an overthinker, but you’re not alone if you are. If you find that overthinking has become a large detriment to your life, talk to a friend, family member and/or a therapist about it.