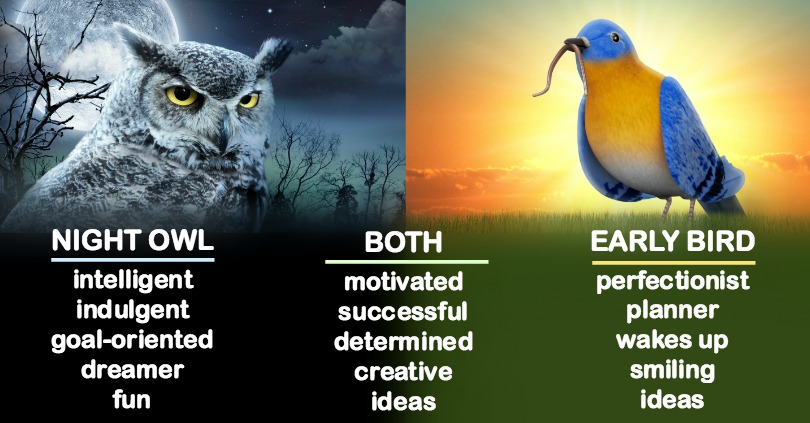 Are You An Early Bird Or A Night Owl?

Everyone is different, and we all have different sleeping patterns. When it comes to sleeping and waking however, there are two distinct chronotypes – commonly referred to as early birds (also called larks) and night owls.

Benjamin Franklin is famous for being an early riser, and he even prescribed his bedtime ritual for people that were lacking motivation. However, contrary to what Ben Franklin thought, night owls can be just as motivated and successful as early birds.

The Difference Between Early Birds and Night Owls 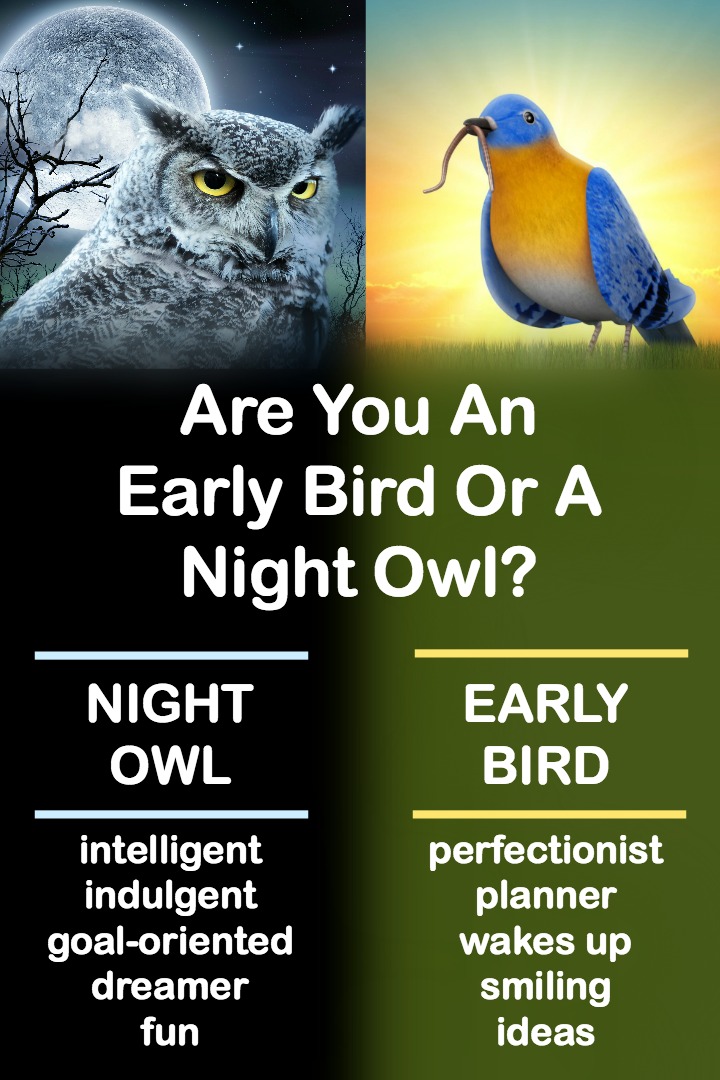 The only difference between night owls and larks might just be the time of the day they go to sleep and the time of day they wake up. Nonetheless, most people inaccurately believe that night owls are lazy individuals who lack motivation.

In reality though, that is not the case. Rather night owls are simply more at ease in their surroundings at night time. The most common characteristic of a night owl is his or her dislike to wake up early in the morning. The snooze button on the alarm is more likely to be used by a night owl than an early bird.

For those of you that don’t know, the words early bird or lark are used to describe someone who wakes up early and goes to bed at a decent hour. A lark is a type of bird that thrives in the morning hours of the day.

Like Ben Franklin, many people believe that early birds are the most motivated and successful individuals alive. However, that belief is completely untrue. Several scientific studies have shown that there are a few key differences between early birds and night owls.

The Science About Early Birds and Night Owls

A study conducted in Spain concluded that night owls are more likely to suffer from fatigue and frustration during the day. On the other hand, larks tend to be perfectionists. While the lark strategically plans his or her own life out, the night owl enjoys spending money on extravagant things. The scientific study also revealed that night owls like to indulge themselves with novelty items. Could these key differences in personality really be linked to sleep patterns? Well, it seems that way, and there is science to back it up. However, there are several other interesting differences between the two chronotypes that are worth noting.

According to science, night owls use those late hours to work on their goals. The lark’s strategic life strategy can actually hold them back from accomplishing anything more in their lives. A motivated night owl is up working when the lark is sleeping. However, an early bird wakes up smiling, and the night owl wakes up in a crabby mood. Each character trait has advantages and disadvantages to their lifestyles. In terms of success, it all comes down to who is willing to put in the work.

Another interesting study showed that night owls happen to be more intelligent than early birds. Over 400 people were tested in mathematics, reading, and writing. The night owls tended to get higher scores than the early birds. However, intelligence doesn’t always mean success. Even though night owls might be smarter, early birds will most likely do better in the real world. Most white-collar jobs take place in the morning, and the night owl might be too busy sleeping away career opportunities. But, that could be another reason why night owls have such big dreams.

A study that wasn’t too surprising showed that night owls love to drink coffee and other caffeinated beverages. This of course makes plenty of sense. The high amounts of caffeine allow the night owl to stay up even later at night. The study also showed that larks prefer tea over coffee, and that could explain why they are unable to stay up late at night. On average, night owls tend to consume much more caffeine than early birds, but that isn’t necessarily a good thing.

Each chronotype might be different to some extent, but their sleeping patterns shouldn’t define their success. Dedicating time and effort towards something is the only way to become successful. Whether you are a night owl or an early bird shouldn’t matter in the grand scheme of things. Besides, science also shows that older people tend to be early birds. You night owls should enjoy the sleep while you can.