What does it mean to be smart? Does it mean a high score on a test, or making good grades in school? The Merriam Webster online dictionary defines intelligence as: “the ability to learn or understand things or to deal with new or difficult situations.”

So making good grades could be a sign that you are smart, but it doesn’t mean you’re not smart if you didn’t do particularly well in school. World-renowned psychologist Howard Gardner’s says that’s because standardized tests only measure one kind of intelligence.

According to his Multiple Intelligences Theory there are at least seven different kinds of intelligence. So even if you weren’t a great student, you might be smart in other ways.

Have you ever made a mistake or failed at something? Sure you have. We all have. Human beings, even the really brilliant ones, make mistakes. Making a mistake, even a total failure, doesn’t make you stupid. Quite the contrary. Failure is a natural part of challenging yourself. But did you know, it’s one of the signs that you’re probably pretty smart, even if you don’t think you are. There are others: 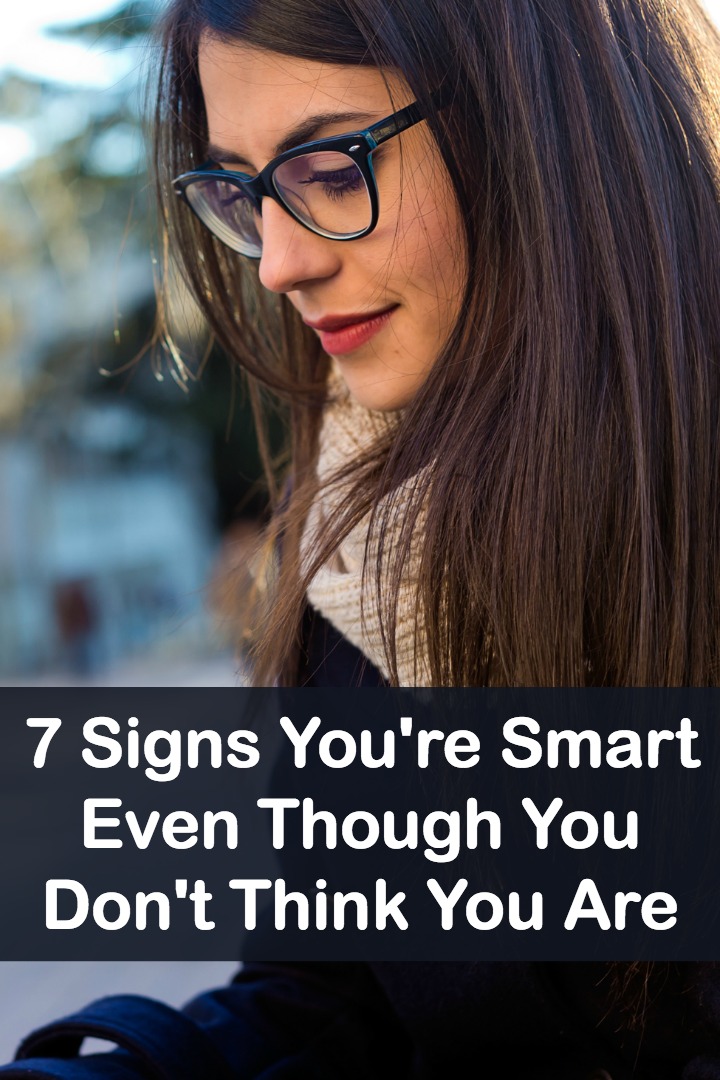 1. You often underestimate your abilities.

It might seem like an ironic twist of fate, that it is the more intelligent, informed and skilled person who can see all their own shortcomings. Likewise, the less intelligent you are, the more likely it is you will overestimate your abilities.

Researchers call this the Dunning-Kruger effect. The fact that you don’t think you’re the smartest person in the room means you just might be.

2. You know that you don’t know everything.

Let’s face it, no one knows everything. Those people who think they do, aren’t very smart. In fact, researchers find the more intelligent you are, the more you realize just how much you don’t know. Truly smart people don’t agonize over the gaps in their knowledge. They just work to fill them. Experts seem to agree that knowing there are limits to your knowledge and skills is a mark of true intelligence.

Maybe you like to try a new restaurant or a new menu item every time you go out to eat. Or maybe you eat the same thing every day and experiment with something else, like changing up your wardrobe, or hair, visiting new places, taking up new hobbies, or trying new things in the bedroom.

According to the Savanna-IQ Interaction Hypothesis, that need to try new things has evolved in more intelligent people as a way for them hone their adaptive skills. This allows them to handle new situations better than less intelligent people. Seeking out new experiences is a sign that you are highly evolved and really smart.

That’s that thirst for knowledge again, along with a healthy dose of skepticism. Even if you don’t actually ask your questions out loud, you do question a lot of what you observe in the world. You want to understand things better.

Since you know how much you don’t know, you’re always seeking the answers to your questions, whether it’s through conversation, or experimentation. According to MIT’s Hal Gregersen, questioning is one of the key traits common to all innovators. Intelligent people are the ones who ask why, how and what if.

5. You have a strong sense of empathy.

Many psychologists believe empathy, the ability to sense the needs and feelings of others, is the core component of emotional intelligence. Memory expert, Dr. Fiona McPherson says more emotionally intelligent individuals have better, faster verbal comprehension.

According to her study, empathetic individuals have an edge over those who lack this ability. In other words,your your ability to “read people” makes you smarter than people who lack empathy.

6. You are drawn to smart, creative people.

Bright, creative minds like to cluster together. So if your friends are smart, you probably are too. If you get to pick the people you work with, smart people tend to pick other smart people.

There are exceptions, of course, but studies show that if you’re smart, about 80% of the people you choose to associate with are also smart, creative and cultured. And don’t forget, your smart friends were drawn to you. That means you smart are too.

7. You adapt to change, even begrudgingly.

Being adaptive doesn’t mean you necessarily like coping with change. It simply means that you do what needs to be done to make things work. That’s smart. Psychologists say it’s the very definition of true intelligence.

It’s the ability to call upon several cognitive processes in order to effectively adapt to a new situation. So your ability to change your behavior and learn new things when necessary means you’re smart.